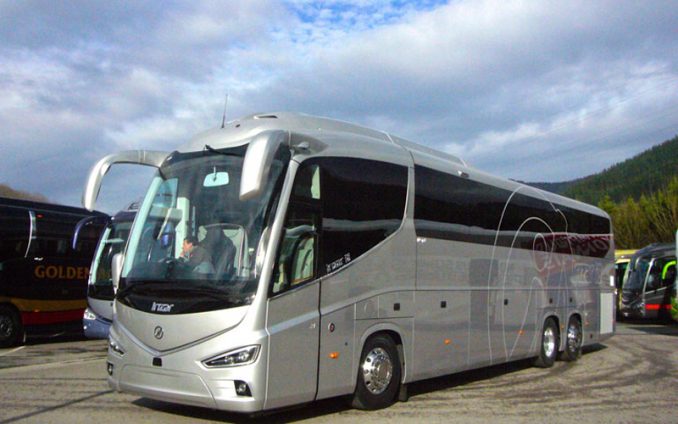 Irizar formally launched its right-hand drive version of the new flagship i8 coach, which replaces the PB as its top-of-the-range offering, to a visiting group of more than 60 UK coach operators in Ormaiztegi, Spain last week. The new i8 will be offered initially in the UK as a three-axle 3.7m-high coach at 13.2 and 14m lengths with a Paccar MX13 engine rated at 462hp or 510hp and ZF AS-Tonic 12-speed automated gearbox. An option of a ZF Ecolife 6-speed fully automatic transmission will be available later in 2016.

The first seven vehicles are now in build with five sold, one demonstrator and a seventh for sale, although strong interest in the latter was shown at the Ormaiztegi launch event. The first four vehicles will all be team coaches with two for Ellisons and one each for Clarke’s of London and Stewarts Coaches.

The i8 features a number of exclusive items that are not available on the i6, including a new range of seats and a multi-media MMI system with joystick control as standard plus a wider entrance door and step.

“During 2015 we delivered our 200th unit, and anticipate the delivery of our 300th unit in 2016,” says Irizar UK sales director Ian Hall. “This growth has not been achievable without a huge investment in people and infrastructure over the last four years, and particularly through 2015.

“In 2015, we turned over £21.5 million, an increase of nearly 50 per cent over the previous year, and delivered just short of 80 integral units into the UK, which equates to approximately 8 per cent of the UK body market. Back in 2011, when we launched Irizar UK, total Irizar products into the UK only took a 6 per cent share of the market; in 2015 they are anticipated to be about 20 per cent.”

The UK operation, based at Worksop, saw its staff numbers double in 2015 to 14 people and Irizar has confirmed plans to invest in a new £3.5million facility close to the existing premises at Johnson Brothers in Worksop which will continue as an Irizar service centre.

“We believe that this new facility will be one of the best of its kind in the European market,” says Steve O’Neil, Irizar UK director.