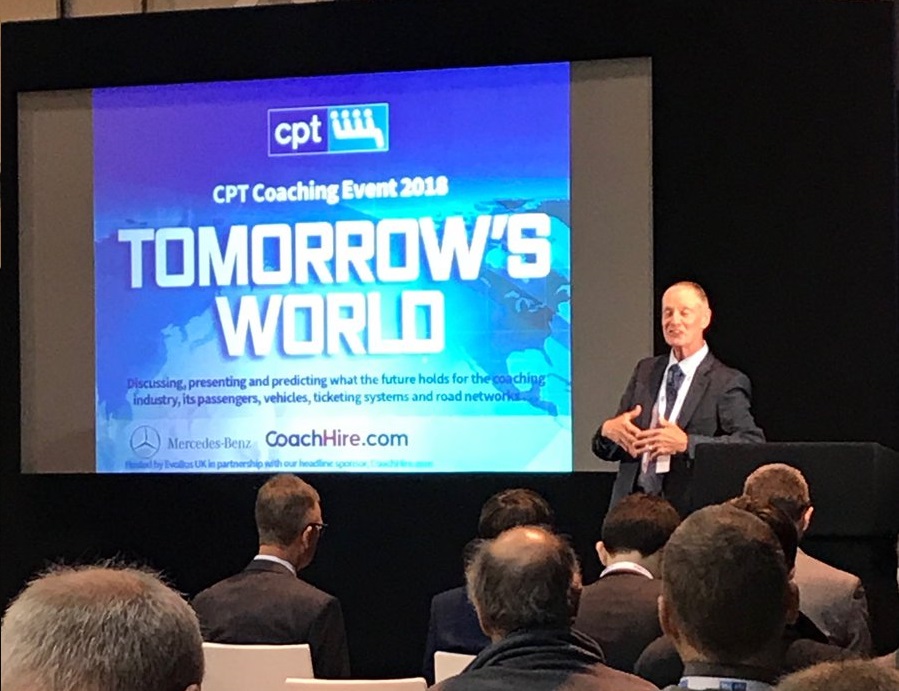 The annual coaching conference by the CPT this year had a a theme of Tomorrow’s World. And this December the event was staged over two days and not the normal one. The first day included the CoachMarque meeting, with the Coach Commision meeting stage later. Any delegates staying overnight were treated to dinner and drinks at the popular Double Tree Hilton.

Here at eCoachManager, we are keen to follow all the latest news and developments from conferences such as the CPT Coaching Conference. As we continuously strive to develop our products and services to dovetail with the latest developments in the coach and bus industry.

The senior sales manager at EvoBus, Ian Wallace, spoke about the electric-power developments that Mercedes -Benz were continuing. Mr Wallace said there were still challenges to face ahead, particularly in the current shortage of energy capacity of electrics.

Also the problems of heating and cooling, as in winter, heating takes as much as 50% of the energy required. In summer a quarter of all total energy is taken for cooling.

The third major challenge is infrastructure and all the entails when you convert a garage for electric from diesel. Electric vehicles take far longer to re-fuel than diesel vehicles and so more planning and scheduling is required. Technicians also have to train on high voltage systems.

Ian Wallace predicted that diesel will continue as the fuel of choice for the next five years after that electric vehicles will quickly develop and so will the range.

In order that the proper infrastructure is in place for the future, there has been a National Infrastructure Assessment carried out by the National Infrastructure Commission. The assessment was published in July 2018, and the main facts that it showed was that growth in terms of population and employment is faster in the big cities more than anywhere else in Great Britain. So the bigger an area becomes the worse the congestion gets.

The report had suggestions that government can take action to deal with congestion and said there was not just one plan that could be put forward as each city presented its own unique problems.

However, there were some common themes such as the car being non-sustainable. Innovation in road use has to be in place for autonomous vehicles. And that is for coaches and buses, as well as cars. How an infrastructure can be built for this nobody is quite certain at the moment.

The Low Carbon Vehicle Partnership is in place to get the DfT to accelerate the shift to low carbon transportation. The Partnership has currently five working groups, with another one planned in 2019, with a remit of how to create government funding for low carbon coaches.

The Partnership gathers important information on low carbon vehicles and carries out their own testing. All this knowledge is then transferred to help generate government policy.

The 20th Century was the age of the car, it was cheap and convenient. A road structure was developed for the car but times are definitely changing as we move to different power sources for the future.

Clean Air Zones are being looked at as the way forward, and they could reshape the look of Britain’s cities in the years ahead. The CPT Coaching Conference 2018 was a look at what the future will bring in the bus and coach industry and provided an insight into some of the possible solutions.