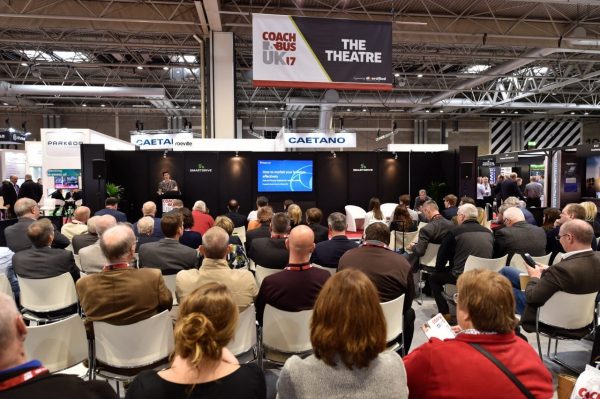 The UK’s leading coach and Bus exhibition for 2019 will take place at the NEC in Birmingham during 2nd – 3rd of October. The bi-annual event has already sold out for exhibitor space and everything points to another roaring success.

The 2017 event was a massive success which welcomed nearly six thousand attendees which included senior executives from all the UK’s largest bus and coach operators. This was an increase on the 2015 figures by two and a half percent.

Seventy percent of the visitors had attended before which demonstrates this exhibition is where the UK coach and bus industry does its business.

While the show hosted nearly two hundred exhibitors the visitors made the exhibition the place where the whole industry was gathered together.

Attendees for the 2017 event included the who’s who of the UK’s Bus and Coach industry including: National Express, First Bus, Stagecoach, Nottingham City Transport, Arriva, Transport for London, Transport for West Midlands, Metrobus, and many many key decision makers.

Many new innovations were on display at Coach & Bus UK 2017, from the latest must have vehicles, to cutting-edge technology, new accessories, and all related services.

Nearly seventy vehicles were on display across 16,000 sqm of exhibition space, and visitors had an opportunity to see:

Alongside the exhibitors there was a plethora of other activities taking place. The Theatre was a non stop hive of activity during the whole exhibition, including stella presentations by some of the industry’s biggest hitters: Ed Wills (Go South Coast), Giles Fearnley (First Bus), Helen Scholes (Stagecoach), Richard Harrington (Go Ahead London), Richard Grey (Grey’s) and Steve Salmon (CPT).

Ian Luckett of Lucketts Travel and CPT President was quoted saying at the end of Coach and Bus UK 2017, “It was a very good show. We always keep our diaries free for Coach & Bus UK, as it gives us the opportunity to see many of our suppliers in one place, and to learn about some of the new technologies emerging in our industry.”

The constant growing interest in transport management systems saw many new advances in software and applications at the Expo. Systems such as eCoachManager have proven their success in the industry, and are continually improving and extending their system to add more features and benefits.

If you are interested about finding more what real transport management systems can do for your company, contact eCoachManager today. Their friendly and highly experienced staff will arrange a free demonstration of exactly what the system can do for you.